President Tommy E. Remengesau, Jr. visited the City of Geru in the mountainous prefecture of Gifu, Japan from August 30 to September 2.  Invited by the High Priestess Morishita of Kurakara Temple, President Remengesau held meetings with the leaders of the religious organization (Kurakara) that helped build two WWII monuments in Peleliu honoring those who lost their lives in the War and the “Omuchel Tekoi” sanctum in Peleliu. The President also held meetings with corporate leaders of Geru including the Presidents of top hotels in Geru, as well as Umewaka International, a top traditional and cultural events organization in Japan; including the President of Yunoshimakan, a 128 year old hotel establishment in Geru and Geru’s top Sake maker and exporter, Tenryo Sake that produces premium beverages for All Nippon Airways.

President Remengesau was able to establish a friendship platform with the group to initiate a “people to people” exchange where our Japanese friends from Geru would visit Palau in groups to experience nature and culture including visiting the WWII “Peace Memorial Park” in Peleliu where Their Imperial Majesties, the Emperor and Empress of Japan visited in 2015.

The Geru group will be visiting Palau in December this year and expressed their intentions to create their own organization called “We Love and Support Palau” to work with the Office of the President to continue “people to people” exchange programs between the citizens of Geru and Palau.

On the last day of the visit, President Remengesau was pleased to learn that Priestess Morishita had organized a Japan Students visit to Palau with the Ritsumeikan Junior and Senior high School with 50 students from the school to visit Palau in early March 2018 to learn Palauan Culture and tradition.  President Remengesau was able to meet with two student representatives from the school and their Principal to establish the students’ itineraries in their visit to Palau as well as discuss the process of having Palauan students visit Japan through the same “people to people” exchange program.

President Remengesau thanked the Gero group, the Ritsumeikan High School, and Priestess Morishita for enabling another important effort to enhance Palau and Japan’s important friendship, saying “It has only been a little over a year since I met with His Excellency Prime Minister Abe at PALM 7 to discuss the importance of our respective peoples understanding each other’s cultures.  I thank all of you for making these important efforts to implement those commitments we made in PALM 7 to enhance and accelerate exchange among our youth and on behalf of the people of Palau, I express my deepest gratitude to you all for the work that you do.” The President said.

I am certain that the visitors from Geru will enjoy their visit in Palau and I am sure that they will appreciate the natural biodiversity and unique culture Palau has to offer that is very different but just as magnificent the beautiful mountains of Geru.  The warmth of the ocean and the colors of the flourishing life beneath it will be a wonder I know the visitors from Geru and the Students from Ritsumeikan will enjoy.  My Office will work with all of you to continue our valuable exchange programs and I hope that our work will become tradition among friends to continue learning and understanding between the peoples of our two countries. I thank you all for continuing our fruitful friendship and I look forward to seeing you all in Palau.” President Remengesau said. 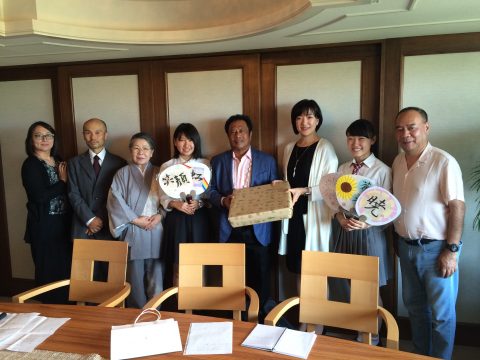