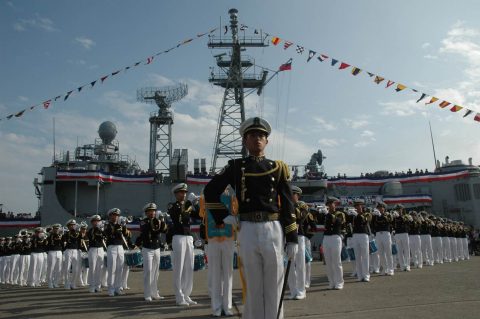 The fleet, consisting of Flagship Pan-Shi, Frigate Si-Ning and Frigate Chang-Chien, conducting “Midshipmen Cruising and Training squadron,” will call at the port of Malakal in the morning of Sunday, May 07, 2017. A welcoming ceremony will be presided over jointly by H.E. Tommy E. Remengesau, Jr., President of the Republic of Palau and H.E. Michael Y. K. Tseng, Ambassador of Taiwan, at 2 pm at the port.
On May 08, there will be Navy marching band and color/honor guards’ drills, and Marine Corps’ martial arts performances at the Belau National Gymnasium at 3 pm. Their performances are both powerful and disciplined. In Taiwan, they only perform when there are national celebrations, military ceremonies and official parades. It is free admission to the general public. All are welcome to attend and enjoy the program.

The general public also has an opportunity to tour on board the Frigate Si-Ning, a La Fayette class patrol ship. The open-house time is 2:35 pm-5:00 pm on Sunday, May 7, and 9:00 am to 3:00 pm on Monday, May 8, 2017. Visitors are required to show photo ID. Children under 12-year old, though photo IDs not required, must be accompanied by adults. Since this year is the Year of the Family in Palau as announced by the President, all Palauan families are invited to spend their family time on the ship during its opening hours.

The fleet comprises 735 navy officers, soldiers, and cadets from Taiwan’s Naval Academy. Each year, graduating cadets sail aboard the Fleet of Friendship for shipboard training. During the long voyage, future naval officers are given opportunities to practice their combat skills and tactics and to enrich their navigational experiences. In recent years, Taiwan’s Fleet of Friendship has sailed to South East Asia, the Pacific islands, the Middle East, Africa, Central America and other parts of the world. This is the 13th visit of Taiwan’s Friendship Fleet to Palau.

In 2016, for the first time two Palauans, Francis Tkel and Shondel Techitong, were accepted to the Naval Academy of Taiwan. Their performances as cadets at the Academy have been applauded by their teachers and peers. This coming August, another two young Palauans are expected to be on board as well. Therefore upon their graduation in a few years’ time, we can expect to see these Palauan students on the Taiwan Fleet of Friendship visiting their home country, Palau. This new connection between Taiwan and Palau has manifested the special brotherhood relationship between our two countries.

The fleet will set sail from Malakal Port for its next destination after a flag-hoisting ceremony at 8 am on Tuesday, May 9, 2017.