On August 22nd, President Tommy E. Remengesau, Jr. accredited His Excellency Leon Malazogu, the first non-resident Ambassador Extraordinary and Plenipotentiary of the Republic of Kosovo to the Republic of Palau in a ceremony held at the Executive Building at the National Capitol in Ngerulmud.

Welcoming and congratulating Ambassador Malazogu, President Remengesau stated, “this ceremony marks a new milestone in the bilateral relationship between our two countries, and we greatly hope that during your term, our relationship will be further strengthened for many years to come”.

President Remengesau expressed Palau’s commitment to work closely with the Government of Kosovo on matters of mutual interest while continuing to look up to Kosovo for mutual partnership and support in areas including trade, tourism, and technology, as well as collaborations on peace and security, protection of the environment and global biodiversity, and health services.

In his remarks, Ambassador Malazogu expressed his admiration for Palau’s environmental and cultural preservation efforts and will work in his capacity to promote Palau as a premier tourist destination as well as promote Palau’s sustainability models within his networks. “What Palau is doing towards the sustainability of its islands is something that the rest of the region and the world should replicate and I will work to promote Palau and its sustainability efforts as Ambassador.  The Republic of Kosovo stands ready to assist Palau in any way it can and we look forward to a strengthened relationship between our two countries,” said Ambassador Malazogu. 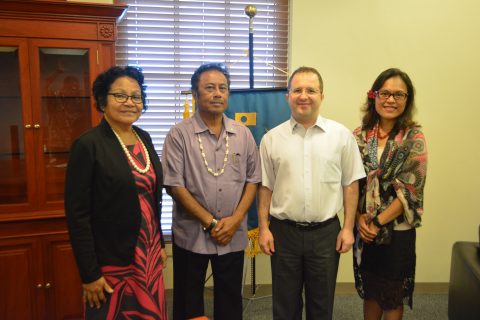