Biography of His Excellency Tommy E. Remengesau, Jr.
President of the Republic of Palau

President Tommy Esang Remengesau, Jr., the ninth President of the Republic of Palau, is the first Palauan to be elected President four times. He was first elected President in 2000 and was re-elected in 2004. Constitutionally limited to two consecutive presidential terms, Remengesau was elected in 2008 as Senator in the Palau National Congress (Olbiil Era Kelulau), where he served until his election as President again in 2012 followed by re-election to his fourth and present term in 2016.

His election as President again in 2016 is a mark of his vitality and commitment to his promise to the People of Palau to work hard to “preserve the best, improve the rest” for Palau, today and for generations to come. During his time in public office, Palau has been recognized for its financial stability and good governance. Remengesau has also amplified Palau’s international leadership and emphasized the importance of regional and global partnerships.

In 2013, President Remengesau, was the recipient of the inaugural Pacific Champion Award, an honor bestowed as part of the Pacific Islands Environmental Leadership Awards for his numerous achievements as a leader in nature conservation and environmental sustainability. In 2014, the United Nations Environmental Programme, the primary voice for the environment in the United Nations system, awarded Remengesau with its top accolade – The Champion of the Earth award for his visionary leadership in strengthening Palau’s economic resilience by spearheading national initiatives to protect its biodiversity. Also in 2014, the environmental organization Rare presented Remengesau with its first Inspiring Conservation Award for his innovative and inspiring work to preserve Palau’s marine resources. In 2007, TIME magazine named him one of the heroes of the environment for initiatives such as the Micronesia Challenge. President Remengesau is now leading the historic effort of implementing the Palau National Marine Sanctuary. This protected, no-take sanctuary, established October 28, 2015 and covering 80% of Palau’s territorial waters with the remaining 20% reserved for domestic fishing, provides even greater protection for Palau’s environment while further enhancing Palau’s tourism revenues. The world’s sixth largest, fully protected marine area, the Palau National Marine Sanctuary is Palau’s defining contribution to preserving the world’s ocean resources. This novel initiative garnered him the prestigious International Game Fish Association’s IGFA Conservation Award in 2014 and the 2016 Peter Benchley Ocean Award for Excellence in National Stewardship.

Remengesau began his political career as the youngest Senator ever elected to the Olbiil Era Kelulau at the age of 28. During his first Senate term, he served as Chairman of the Committee on Ways and Means and was instrumental in helping to erase Palau’s outstanding budget deficit and bringing about stability and credibility to government.

In 1992, Remengesau was elected Vice President of Palau, the youngest Palauan ever to serve as Vice President. He was re-elected as Vice President in 1996. As Vice President, he concurrently held the position of Minister of Administration (now Finance), helping the Republic gain membership in the International Monetary Fund and the World Bank Group. He also helped lead Palau’s transition to an independent country in 1994. 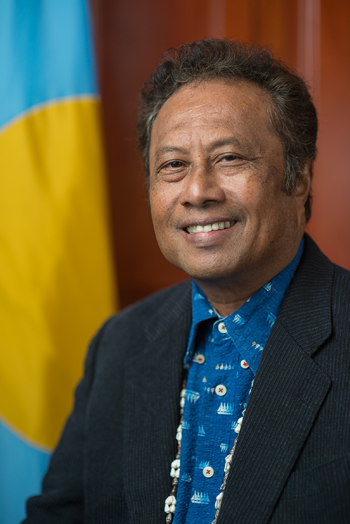