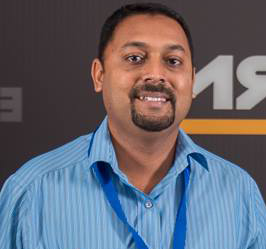 Dhiraj has been working at USP for over 11 years, firstly started as an IT assistant with the Japan International Cooperation Agency(JICA) funded ICT Capacity Building Project based at USP. He has progressed up the ranks in recent years and currently is the Acting Director & Learning Systems Manager for CFL. He joined USP after completing his Bachelor’s degree in ICT with Central Queensland University (CQU) and also holds a Master’s Degree in Computing and Information Systems from USP.

He is also a current member of the USP Council as a staff representative and also is the Vice President of Association of The University of the South Pacific Staff (AUSPS). His interests lie in open and distance education, learning analytics, IoT (Internet of Things), volleyball and soccer. 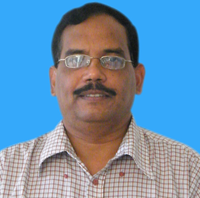 Dr Anand Chand is an Associate Professor in the School of Management and Public Administration, FBE, USP. 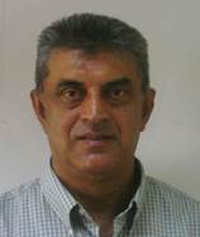 Mr Parmesh Chand holds a Bachelors Degree in Arts from University of the South Pacific and Masters Degree in Economics Studies from University of Queensland in Australia.  He started his career with the Colonial Mutual Life Assurance Society in 1984 as an Investment Analyst.  He has tutored and lectured in Economics at University of the South Pacific.  He has worked as a Loans Officer at the former National Bank and rose through the ranks until becoming Chief Manager’s Assistant.  He has worked as Permanent Secretary, in Government of Fiji, the most senior executive position in Government.  Overall, Mr Chand has a total of 28 years work experience having worked in public administration covering promotion of trade and investment at national level, administration and management in the Office of Prime Minister and Ministries of Home Affairs, Information and Sugar and management of human resources and training in the Public Service. 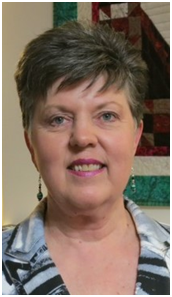 Deborah is an Executive Level officer with more than 30 years’ experience of program and service delivery in the Australian Federal and State Public Services.

During this time, Deborah has built public sector capacity and helped strengthen the public services of Papua New Guinea, Ghana and several Pacific Islands including Fiji, Samoa and the Solomon Islands.

Dr. Vijay Naidu has been employed at USP since 1974 in various academic, and academic administration and leadership positions. From 2007 to 2014 he served as Professor and Director of Development Studies and the Head of the School of Government, Development and International Affairs (SGDIA) in the Faculty of Business and Economics (FBE) at the University of the South Pacific (USP). Over the last two years he continued as Professor and Director of Development Studies and was appointed for varying periods of time as Acting Head of School of Management and Publication Administration and Acting Dean of the Faculty of Business and Economics. He was Professor and Director of Development Studies at Victoria University of Wellington (2003-2006). He has researched and written on the nature and role of the state in Pacific island development, political development and electoral politics in Fiji, and on social development in the South Pacific*. He is on the editorial board of a number of scholarly journals.

He has been a consultant to government, non-government organisations and to UN agencies. He is a founding member of the Citizens Constitutional Forum in Fiji.

* 12 books and monographs, 20 reports and more than 70 papers published as book chapters, journal articles and conference proceedings as well as more than 150 conference papers.

Jane is an Executive Level officer with more than 20 years’ experience of program and service delivery in the Australian Public Service.

During this time, Jane has built public sector capacity and helped strengthen the public services of Indonesia, Papua New Guinea and several Pacific Islands including Fiji, Samoa, Solomon Islands and the Marshall Islands.

Jane is an Executive Coach with the fundamental skills to ask the right questions, develop self-awareness and build strong relationships. Coaching is widely accepted as a valuable tool for executive and leadership development in Australia. 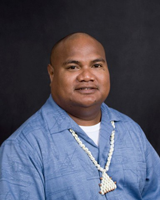 Mr. Umiich Sengebau was appointed and confirmed as the Minister for the Ministry of Natural  Resources,  Environment  and  Tourism  for  the  Republic  of  Palau  in  February 2013. He is responsible for the management, protection and development of Palau’s natural resources including guiding the implementation of Protected Areas Network (PAN) program and the Palau National Marine Sanctuary initiative.  Minister Sengebau also oversees the implementation of the Palau’s tourism policy of targeting high-­‐value tourism and the new tourism destination brand of “Pristine Paradise. Palau.”  Prior to joining President Remengesau’s administration, he served as the Deputy Director of Conservation of The Nature Conservancy-­‐Micronesia Program.  Mr. Sengebau holds a Master  of  Science  degree  in  Environmental  Science  from  University  of  Guam  and received his Bachelor of Arts degree in Anthropology and Pacific Islands History from University of  Hawaii at  Manoa.    Mr. Sengebau is  a  member of  Palau Conservation Society Board of Directors and Palau Protected Areas Network (PAN) Fund. He also served on Environmental Quality Protection Board (EQPB) from 2003 to 2009. 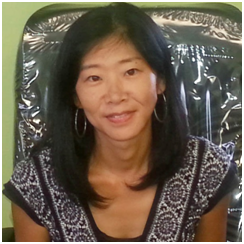 Ms. Nanae Singeo has been working as the Managing Director of Palau Visitors Authority since March, 2014.  Prior to her career at PVA, she spent about 20 years in Marketing at Procter and Gamble mainly in Japan, China and Singapore.

With her marketing expertise, Ms. Singeo launched a several initiatives including new Branding work under “Pristine Paradise. Palau”, new digital / SNS strategy developments, Airport Exit Surveys and new sustainable tourism products development in Babeldaob States.  She hopes to bring tourism benefits to back the communities and PVA’s mission statement come to life,“We are committed to promote our heritage and the unique attractions of Palau through sustainable tourism development and the encouragement of responsible practices.”

A native of Japan and is married to her Palauan husband.  She is an active diver and kayaker.  They now live in Koror with their three year old son. 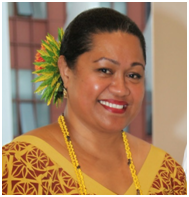 Leituala Kuiniselani Toelupe Tago-Elisara is the Director for the Social Development Programme at the Pacific Community (SPC), covering Gender, Culture and Youth.

As Director for the Social Development Programme in the Pacific Community, Ms Toelupe Tago – Elisara provides strategic leadership and management for the SDP Team across the areas of gender, youth and culture from a regional perspective. The SDP team’s mandate includes the provision of technical support to Pacific Island Countries and Territories (PICTs) in line with the Pacific Platform for Action on the Advancement of Women and Gender Equality, the Pacific Youth Development Framework, the Regional Culture Strategy and decisions from the relevant Ministerial and Forum Leaders Meetings. This includes collaboration and networking at regional level with other members of the Council of Regional Organizations of the Pacific (CROP) and development partners to ensure coordination at regional level for support provided to PICTs.

Ms Toelupe Tago – Elisara is a graduate of the University of New South Wales, where she graduated with a Masters in International Social Development in 2002. She is also a graduate of Massey University, where she graduated with a Bachelor of Social Work in 1997. Later in her career she also completed further qualifications through distance learning including an Advanced Diploma in Business Management from the University of New England through the UNE Partnerships (Armidale, New South Wales) delivered under the Executive Development Programme for senior public servants in Samoa (coordinated through the Public Service Commission –Samoa); and a Diploma in Government and Certificate IV in Training and Assessment from Victoria University (Melbourne, Victoria, Australia).

Before joining SPC, Ms Toelupe Tago-Elisara was Chief Executive Officer (CEO) for the Ministry of Women, Community and Social Development (MWCSD) in Samoa where she worked for 7 years before she was appointed CEO. She held the position of CEO for 5 years before she resigned to take up her role in SPC. As CEO for MWCSD, Ms Toelupe Tago-Elisara’s portfolio covered village governance and village development; advancing gender equality; youth development; child protection and disability; including work on human rights, more specifically on the Convention on the Elimination of All Forms of Discrimination Against Women (CEDAW), the Convention on the Rights of the Child (CRC) and the Convention on the Rights of Persons with Disabilities (CRPD). As CEO for MWCSD, she also served on several Government Boards and National Committees providing oversight and strategic direction across different sectors of Government, some of which included Health, Education, Agriculture, Water and Sanitation, Environment and Law and Justice. She was also Chairperson of the national partnership committees for CEDAW and CRC, and the National Disability Taskforce. These Forums brought together both government and civil society organisations working on the promotion of gender equality, child development and disability in Samoa. Ms Toelupe Tago – Elisara in her role as CEO represented the Government of Samoa on various regional and international fora including regional Ministerial and High Level forums; and international forums such as the Commission on the Status of Women; the Universal Periodic Review and the reporting at the UN on Human Rights Conventions the Government of Samoa is a State Party to.

Ms Toelupe Tago-Elisara is based at SPC headquarters in Noumea, New Caledonia.