The Chairman of Belau Submarine Cable Corporation (BSCC), Mr. George Rechucher, today signed an Interconnection Agreement with Globe Telecom’s CEO, Mr. Ernest Cu. At the same time the Secretary of the Department of Transportation, Communication & Infrastructure of the Federated States of Micronesia (FSM), Mr. Lukner Weilbacher, signed a similar agreement with the Chief Technology Officer of Telin, Pak Nanang Hendarno. Signing of the agreements was witnessed by the President of Palau, His Excellency Tommy Remengesau, Jr. and the President of FSM, His Excellency Peter Christian, at a ceremony at the Hyatt Regency in Guam.

The agreements provide for spur submarine fiber optic cables currently under construction from Palau and Yap in FSM to interconnect with the SEA-US cable for onward transport to Guam. Globe Telecom (Philippines) and Telin (Indonesia) are major owners of SEA-US, a new cable that will link Indonesia and the Philippines to the USA via Guam and Hawaii, in partnership with GTA (Guam), Hawaiian Telecom (USA) and RTI (USA).

Construction of the spur from Ngeremlengui state in Palau to the SEA-US cable to the north is well advanced, with the modular Cable Landing Station expected to arrive at Koror next week. From there it will be transported by barge to the landing site for installation.

President Remengesau said, “I am delighted to see this milestone marked today. The submarine fiber network will be critical to so many aspects of our life in Palau, from healthcare to education, from social networking to business. With the BSCC network expected to be in service before the end of the year, Palau is on the move.”

The Interconnection Agreements provide for five 100 Gigabit per second wavelengths to Guam, more than 1000 times the current capacity available in Palau, and will provide a big boost to businesses, schools, hospitals and clinics, government services, entertainment and social networking. The BSCC project is currently on schedule, and is expected to be in service in December 2017. BSCC Chairman George Rechucher confirmed, “We are progressing strongly towards our goal of Ready for Service by the end of 2017. We are confident we are on target.”

Palau will see an increasing level of activity in coming weeks and months, with expert teams from Sweden (Flexenclosure, the Cable Landing Station supplier), Japan (NEC, the submarine cable network supplier) and throughout the Pacific (the BSCC Project Management Unit) arriving to install equipment and ensure the highest quality standards. Local contractors, Surangel’s, have been busy preparing the Ngeremlengui landing site.

The Minister of Finance, Hon. Elbuchel Sadang said, “BSCC has been positioned to deliver abundant capacity to our retail service providers in Palau at cost, ensuring maximum benefit to the community and commerce. We expect our service providers will step up to the plate and make the most of this opportunity to transform their businesses.”

Further information on this exciting project is available from http://belaucable.com 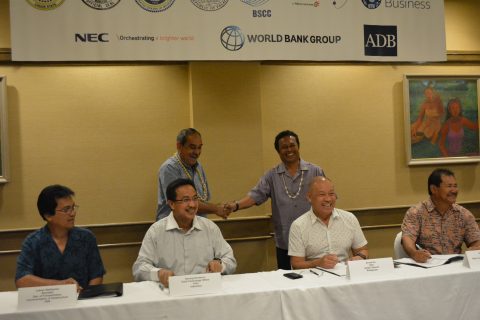